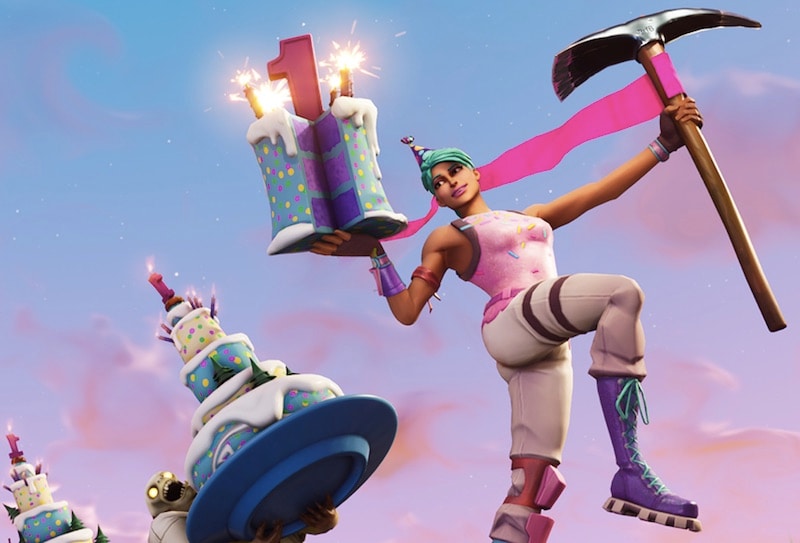 Fortnite is celebrating its first birthday by rewarding its players with in-game events that begins on July 24 and ends on August 7. Those playing Fortnite Battle Royale will be able to partake in challenges that unlock the birthday cosmetic set including Fortnite back bling. And if you’re playing Fortnite Save the World, there’s the Fortnite Birthday questline. Completing it gets you the Birthday Brigade Ramirez Hero while earning tickets gets you Birthday Llamas which can contain heroes and weapons from every event this year.

As for Fortnite Battle Royale challenges, each challenge you complete will unlock a slice of the birthday cosmetic set.

Epic Games’ efforts with the title have seen it rake in $1 billion in micro-transactions alone. According to research firm SuperData (via GamesIndustry.biz) this is what the game has earned from October 2017 to May 2018.

Previously, SuperData stated that Fortnite revenue passed PUBG by $23 million (approximately Rs. 149 crore) with a total of $126 million (roughly Rs. 818 crore) in March. Till then PUBG had earned $103 million (around Rs. 669 crore). This isn’t all. Even in terms of viewership Fortnite has taken the lead. The colourful, cartoony shooter hit a total of 14 million unique viewers on Twitch versus the 8.7 million PUBG had in February. In terms of Twitch viewers, Fortnite saw 6.1 million in January versus PUBG’s 8.5 million.

According to SuperData PUBG revenue peaked in December. This was the month it left Steam Early Access on PC and launched on Xbox One. Comparatively, Fortnite’s trajectory steadily continued upwards. No surprise since Fortnite is immensely more accessible and its battle royale mode is free versus the $30 (Rs. 999 in India) price tag PUBG has.