BENGALURU: The Indian Institute of Management Bangalore (IIMB) was jubilant in August when it hosted students from 19 global management schools for a course. But barring such isolated cases, the number of foreign students coming to India saw a drastic decline in 2014 compared with 2013.

Experts say no one reason can be given for the sudden dip but the way forward, as pointed out by people such as Professor C N R Rao, Infosys co-founder N R Narayana Murthy and others, is to improve the quality of institutions to attract more foreigners. 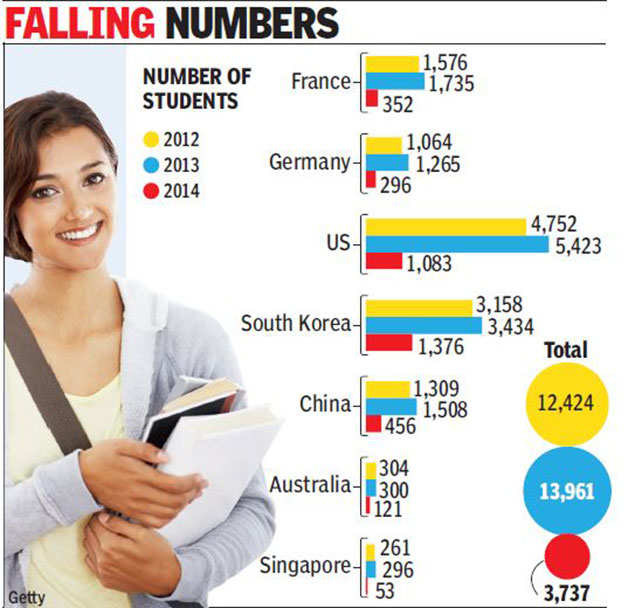 Students from over 160 countries came to India in these three years. The decline is seen not just in those coming from countries ranked higher than India but even from countries such as Afghanistan and Bangladesh, and from many African countries. The number of students coming from Afghanistan fell from 6,508 (2013) to 5,738 (2014). The number of students from Bangladesh fell from 1,954 (2013) to 1,247 (2014) and Sri Lanka, from 2,502 to 1,492 in the corresponding period. The number from Pakistan has been insignificant.

The decline, some experts say, is a lesson as it’s a reflection of where Indian institutions stand globally.

The Indian Institute of Science (IISc), the only Indian institute to be ranked within the top 100 global ones, had just 25 full-time foreign students in 2014. In June this year, Usha Vijayaraghavan, IISc international cell chairperson, made a presentation on what the institute has been doing to improve its standing and the challenges ahead. “While we’re doing collaborative work with some of the best universities abroad, the challenge is to attract more foreign students and faculty to do research here,” she said. “We have a long way to go in that direction and efforts are on.”

IIIT-B founder director S Sadagopan said: “The government has not understood the soft power of higher education. It obviously cannot be measured or quantified in dollars. But we will have ambassadors for life. Take [former prime minister] Manmohan Singh for example. He passed out of Cambridge 55 years ago, but still has a soft corner for it. I studied in the US for four years about 40 years ago. I may not like everything the US does, but I certainly have a soft corner for it.”

Pointing out that there needs to be an institutional change in the way foreign students are treated, he said: “One reason for the decline could be all the bad publicity India is getting.”

He said the way these students are treated must improve and a proper mechanism must be put in place to attract more students and get them to do more courses and recommend our institutions to others back home.

The bad publicity didn’t seem to have an effect on the likes of Jose Antonio Borrero, a student at IIMB in August. “Beyond the course that has been of great help, I just love India,” he had said. “I’ve already interned in Mumbai and now I’ve asked my parents to join me after my course.”